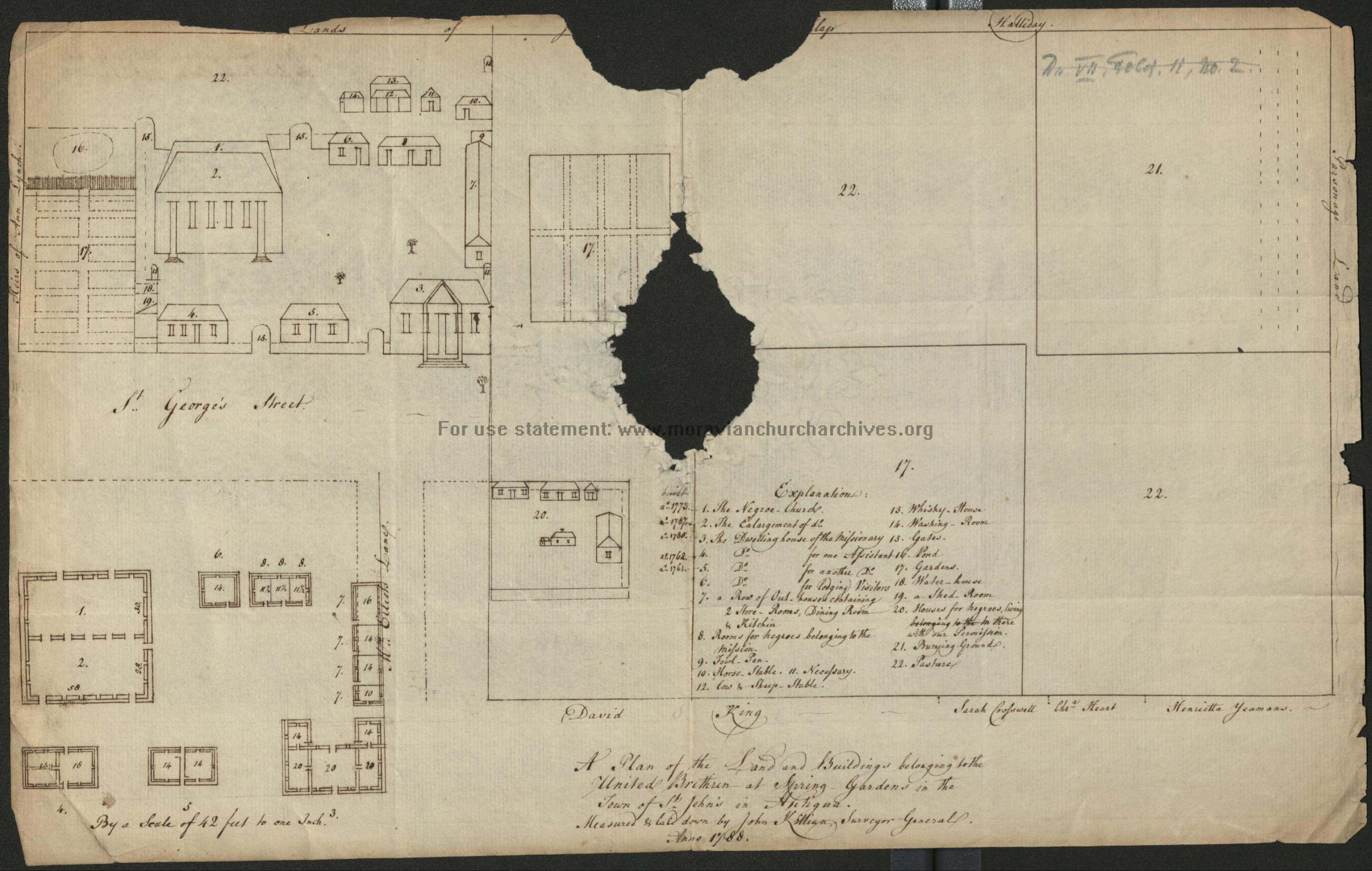 As part of a new series of posts, we’re highlighting different MAB collections that have been digitized and are accessible online. See our first post at https://www.moravianchurcharchives.org/digital-access/1057/.

As today (April 14, 2020) would have been his 297th birthday, it seems a good time to touch on the career of the Moravian missionary Samuel Isles (1723 – 1764). Isles, or “Brother Sammy” as he was sometimes affectionately referred to by his peers, was born near Leeds, England and joined the Moravian Church in 1743. Several years later he began working as a missionary for the church and traveled extensively, notably to places in the West Indies such as St. Thomas, St. Croix, and ultimately to Antigua, where he was the first Moravian missionary and founder of the mission station at Spring Gardens. Isles was married twice, to Molly Waters in 1754, who passed away in 1760, and some time later to Maria Margareta Zerbe, both of whom traveled and worked alongside Isles in the Caribbean. Samuel Isles would ultimately pass away in Antigua in 1764 but is remembered for his legacy of missionary work for the Moravian Church. His diaries and correspondence are available in our digital collections (see links at the bottom of this page), which contain insight into early Moravian Church history in Antigua and around the world, among other topics.

In this passage drawn from the travel diary Samuel Isles and his wife Molly kept during their initial journey to Antigua in 1756, he talks about their early efforts to establish themselves and begin the work of ministering to the island’s population, saying (translated), “We commissioned a Negro, who was a carpenter to come to us around noon to make us something small [to live in], but indeed, twas actually a good opportunity win [souls], to discuss something important with him. He was named Jean Baptiste. He thanked God that he had the fortune in his youth to be baptized by the French. By my recollection, he’d heard something of the Crucified in the French language and also was taught some prayers and recited to us ‘Our Father’ [in French]. In English, however, he said that he could neither not say much from it, nor pray. I could do nothing but good things with him and invited him to visit us. Incidentally, I had a rather enjoyable lovefeast with my Molly, because I had my 34th birthday today. My principal supplication and blessing was firstly to my dear Martyr; that He will be once more in his martyred form, in the most tender nearness, and so remain for eternity, and secondly, that our dear heavenly Father desires to betoken us a little place and hungry hearts in this land [i.e. Antigua]; [and] that we could inquire about His dear son’s death and merits.”¹

The following quotation, drawn from his diary in St. John’s, Antigua, further describes the kind of work he and other Moravian missionaries were carrying out, saying, “A mulata woman nam’d Betsey Johnson came & wanted to learn to read & to be instructed how she might be a Christian. She said a Lawyer Mr. Congers had sent her & he would pay for her Learning.”² According to 19th-century Moravian minister Christian Friedrich Richter and in contrast to the missionary endeavors of some groups, Moravian missionaries in Antigua believed that—although some planters were opposed to it—the teaching of reading to enslaved individuals provided a “means of promoting their growth in grace and spiritual understanding.”³

We encourage you to discover more in the links below!