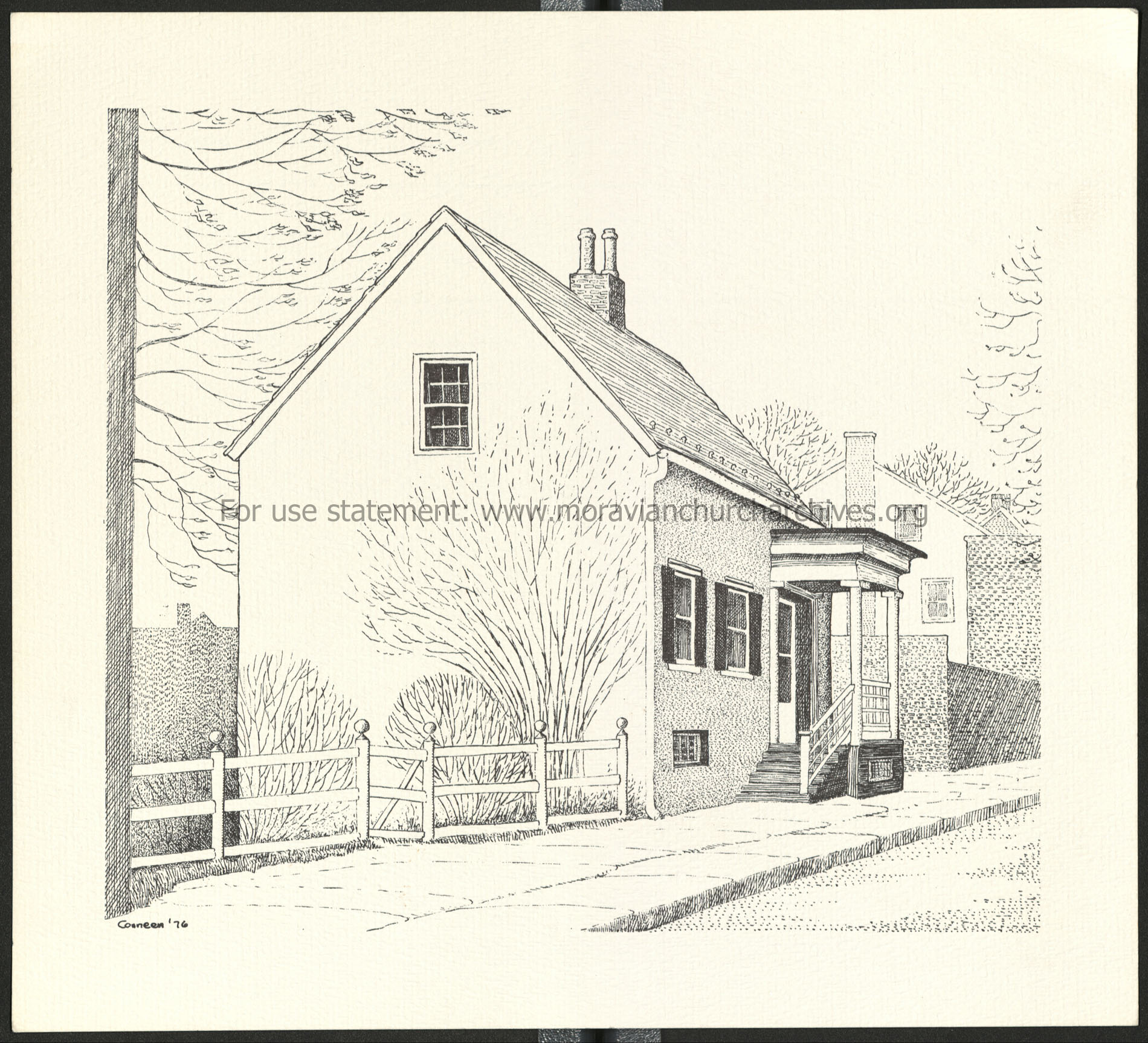 This lovely etching of a small home from our digitized Drawings and Prints Collection was made in the 1970s and is attributed to artist Jane W. Conneen (1921-2008). It shows the Nain-Schober house in Bethlehem, PA, an 18th-century structure that stands as a reminder of the tumultuous and often tragic relationship between European settlers and Native Americans in the region.

The Moravians in Bethlehem had long been active in proselytizing among Native Americans, something Count Nicolaus Ludwig von Zinzendorf had emphasized as a priority while visiting the region in 1742. Moravians established the community of Nain, near Burnside Plantation, as a home for Native Americans that had joined the church. There were already concerns that the said Native Americans might face violence as a result of tensions surrounding the ongoing French and Indian War, but both the state government and the people of Bethlehem promised that the Nain community would be kept safe. Construction began on the settlement in 1758 and by 1762 there were at least 14 houses, a chapel and a population of at least 90.

Unfortunately the community of Nain soon became caught up in the rising prejudice against and conflict with the Native Americans. In 1763, as tensions rose and accusations were made that the inhabitants of Nain were involved with violence against settlers in the region, the state government instructed that said inhabitants move to Philadelphia, ostensibly to protect them from violence (this was around the same time as the Conestoga Massacre, in which a number of Native Americans were murdered by the Paxton Boys, a group of vigilante frontiersmen) they were forced to live on a small island in the Delaware River where over the course of 15 months nearly half died, many of disease. While these events were transpiring, the Moravians of Bethlehem concluded that given the political and social climate there was no possibility of the Nain community continuing, and after the surviving Native Americans left Philadelphia in 1765, they stopped briefly in their previous home before leaving, many going to the Moravian mission of Friedenshütten, near the current town of Wyalusing in northeastern Pennsylvania.

After the demise of the village, the house was acquired by a local mason, Andreas Schober, who had the structure disassembled and rebuilt a mile away in 1765, then in 1905 the home was again moved again, this time to its current location, in order to save it from demolition and has since been restored. Today, the Nain-Schober house is managed and interpreted by Historic Bethlehem Museums & Sites.

Conneen’s etching is one of 5,000 drawings and prints that have been digitized and made available in our online finding aid. A complete listing of digital resources (both digitized collections and translations) is available at https://www.moravianchurcharchives.org/research/digital-resources/.