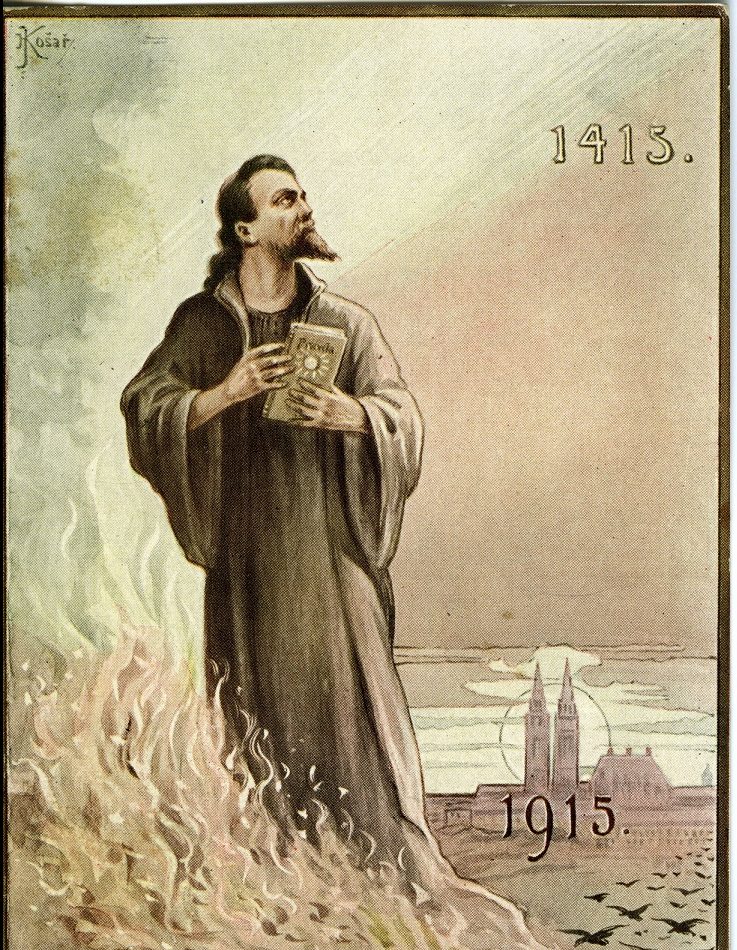 This 1915 lithograph of a man being burned at the stake portrays an event that occurred 605 years ago this month and was a major event in the history of both the Moravian Church and Christianity as a whole, the death of the Bohemian religious leader Jan Hus.

Born to a peasant family around 1370 in Husinec, Bohemia (now part of the Czech Republic), Hus attended the University of Prague and by 1401 was ordained and preaching at a popular church in the city. Influenced by the writings of the English theologian John Wyclif, Hus was increasingly critical of the Catholic Church, denouncing the wealth and corruption he saw amongst the clergy and trying to focus on the Bible over church teachings. In particular, he spoke out against indulgences, church-led military actions such as a crusade in Naples, and simony (i.e., the sale of church positions or favors). This soon brought Hus into conflict with both the Catholic Church and the Bohemian government, ultimately leading to his excommunication. Though he did not face severe consequences immediately, his exile in the countryside allowed him to focus on his writing for some time.

This all changed in 1414 when he was invited to speak and present his views at the Council of Constance, a major Church meeting perhaps best known for ending the Papal Schism, a period where three people claimed to be the rightful Pope. Hus only accepted the offer to speak only after he was assured safe travel to and from the council regardless of what happened there, but unfortunately, this agreement was not kept and he was soon arrested as a heretic. Hus refused to recant his beliefs before the council and on July 6, 1415, he was convicted and burned at the stake.

While Jan Hus died for his beliefs his influence would live on, his execution led to the Hussite Wars, a series of armed conflicts between his followers in Bohemia and crusades ordered by the Catholic Church. While his writings would go on to be a major influence on Christians in the future, including Count Zinzendorf as he was establishing the Moravian Church. Jan Hus is now considered a central figure in the century leading up to the Reformation.