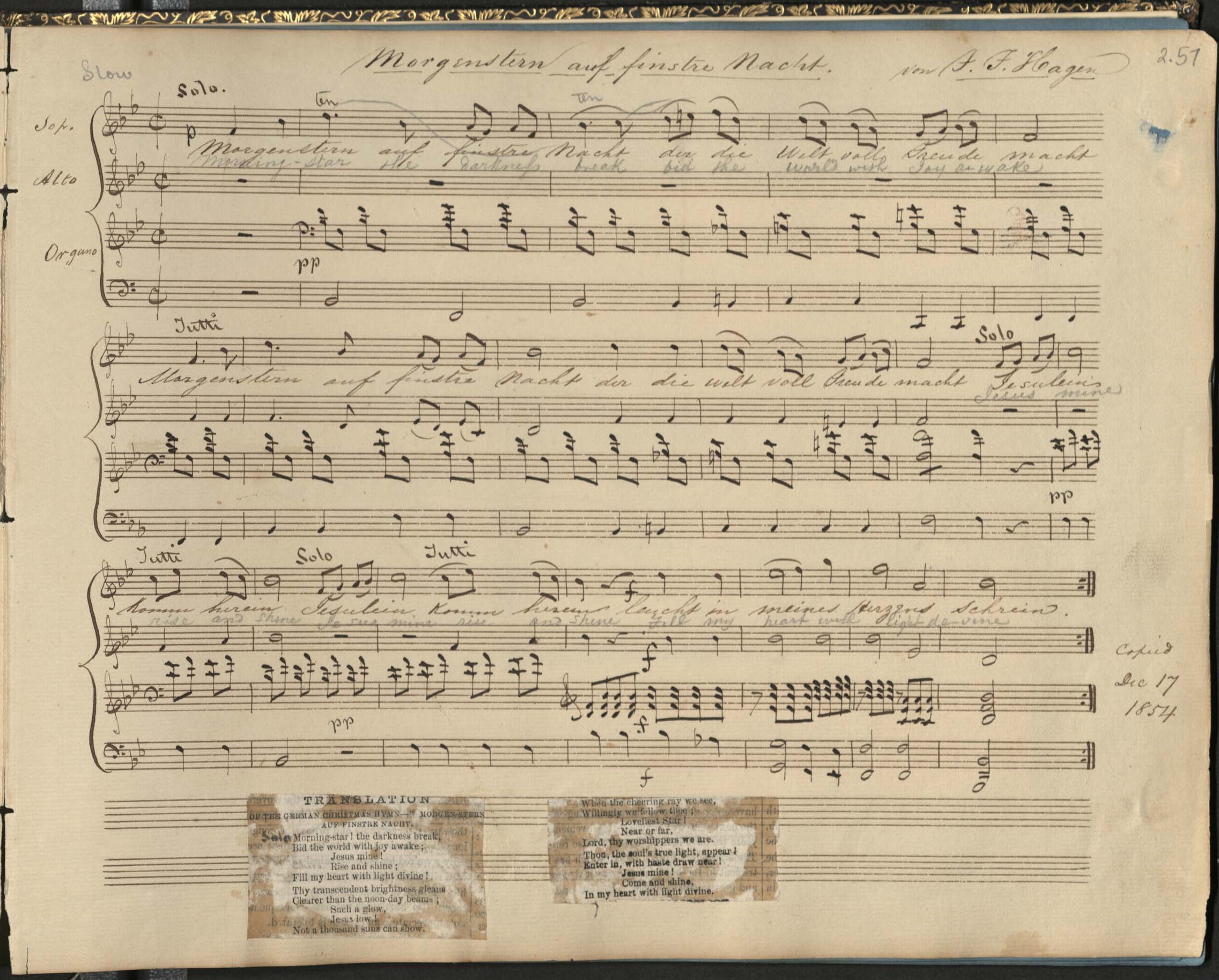 This piece of nineteenth-century sheet music is the song “Morgenstern auf finstre Nacht” or “Morning Star of the Dark Night” and is an interesting example of the importance and long history of music in the Moravian Church.

The hymn is based on a poem by the priest, physician, and poet Angelus Silesius (1624–1677), born Johann Scheffler in what is now Poland. His interest in mysticism led him to convert from Lutheranism to Catholicism and was a major influence on his writing, which included poems and hymns as well as polemics against the Protestant Reformation. Count Nicolaus Ludwig von Zinzendorf included 79 of Silesius’s hymns in a 1727 collection and overtime “Morgenstern auf finstre Nacht” came to be primarily associated with the Moravian Church.

While several musical arrangements have been made to accompany this piece, the one displayed here was written in 1836 by Francis Florentine Hagen (1815–1907), a minister and composer who was born in Salem, North Carolina and who was teaching at the Boy’s School there at the time.

Interestingly this example of the hymn includes different English lyrics than those seen in most modern copies. This can be observed in clippings attached to the bottom of the page and part of it is also handwritten on the music itself underneath the German text. For comparison, the first line of this version reads:

“Morning-star! the darkness break,
Bid the world with joy awake;
Jesus mine!
Rise and shine;
Fill my heart with light divine!”

In contrast, here is the first line of a version by Moravian minister Martin Hauser (1799–1875), which is included in the current Moravian Book of Worship.

“Morning Star your cheering light
can dispel the gloom of night.
Morning shine,
Jesulein,
in this darksome heart of mine.”

The popular translation sung today was written by Bennet Harvey (1829–1894), a Moravian missionary who worked on a 1886 Moravian hymnbook, and reads:

“Morning star, O cheering sight!
Ere thou cam’st, how dark earth’s night!
Jesus mine, in me shine;
In me shine, Jesus mine;
fill my heart with light divine.”

Most likely these differences are a result of the challenges inherent in translating between languages. Providing a literal poetic translation is particularly difficult when having to deal with the cadence of music as well as rhyme.