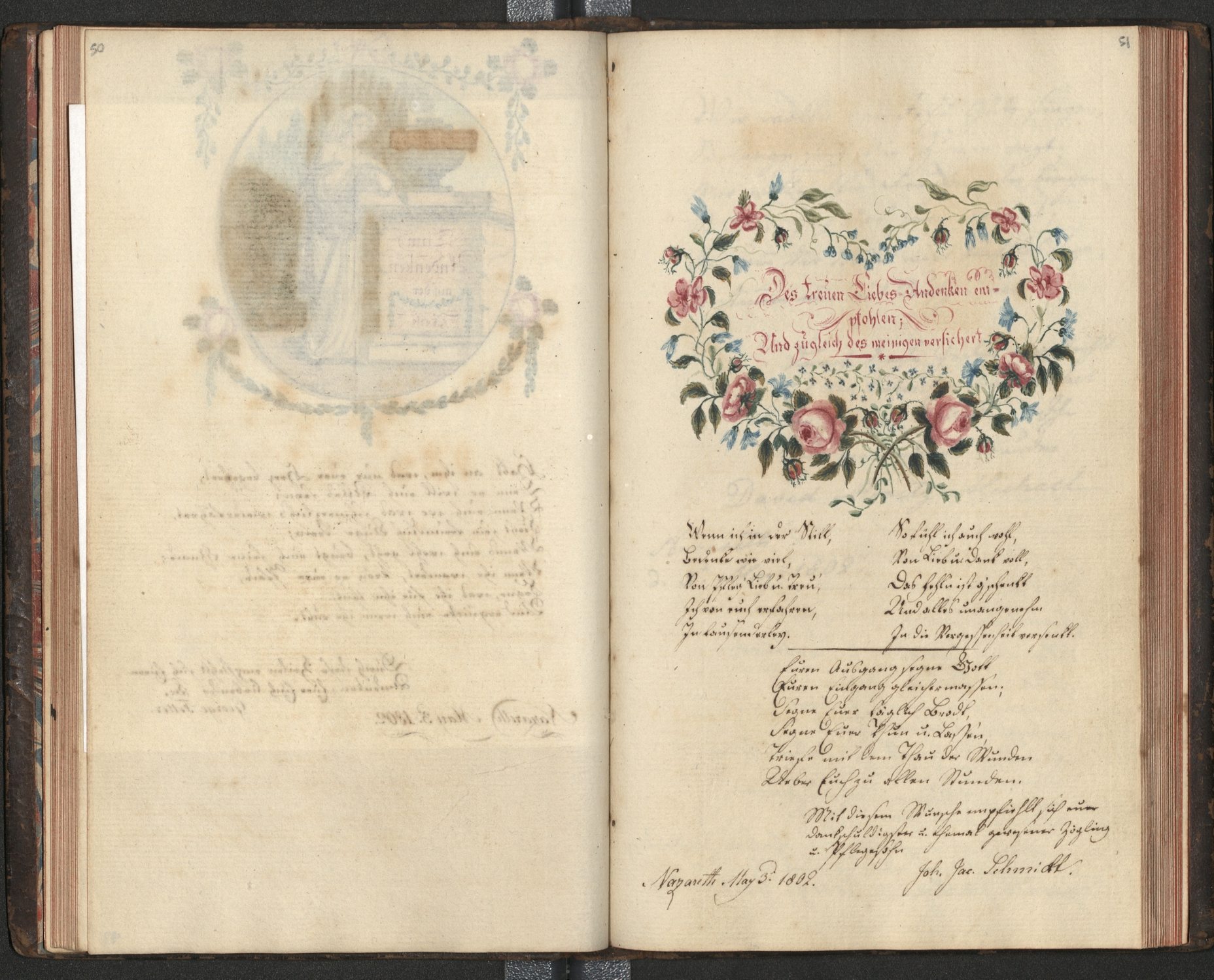 In light of Valentine’s Day, it seems a good time to highlight this page from an 18th-century book that displays a lovely floral heart and sentimental message, though it was not intended romantically but is rather an example of an autograph book, a practice that was popular in 17th and 18th-century Europe and is in some ways a predecessor to the modern yearbook or guest book.

Autograph books, also known as album amicorum or “book of friends” are first known to have appeared in 16th-century Europe and became especially popular with academics and students at German and Dutch universities. These could be simple blank books or purpose made ones with illustrations and elaborate covers and people would ask their associates at school or while traveling to add something to the book such as a personal message, quotation, passage from a text, or illustration. The resulting volume was a memento of the owner’s experiences and people they’d known and also served as a kind of unofficial credential of their education and contacts with different schools and scholars. Over time autograph books gradually fell out of common use, with their role in academia in particular largely being taken over by yearbooks and more formal credentials.

The autograph book shown here belonged to Carl Gotthold Reichel who was born in Hermsdorff, Poland, in 1751 and was educated in Moravian schools before going on to teach at the school at Niesky (Germany). In 1785 he traveled to the United States and was the first principal of Nazareth Hall ¹ , a school initially founded for the sons of Moravian ministers but soon opened to the community as a whole. After this he was consecrated a bishop in 1801, holding the position in both Salem, North Carolina, and Bethlehem, Pennsylvania, before returning to Germany for a General Synod in 1818, where he remained until his death in 1825.

This particular page is dated to May 3, 1802 in Nazareth and was written by Johann Jacob Schmiddt, a former student at Nazareth Hall. The text in the heart design reads “Des treuen Liebes-Andenken empfohlen; und zugleich des meinigen versichert” which translates as “Commend me to your faithful memory, and rest assured you’re likewise in mine.” Given the detail and complexity of the floral design it seems likely that Schmidt had borrowed the autograph book for some period of time in order to complete the illustration.