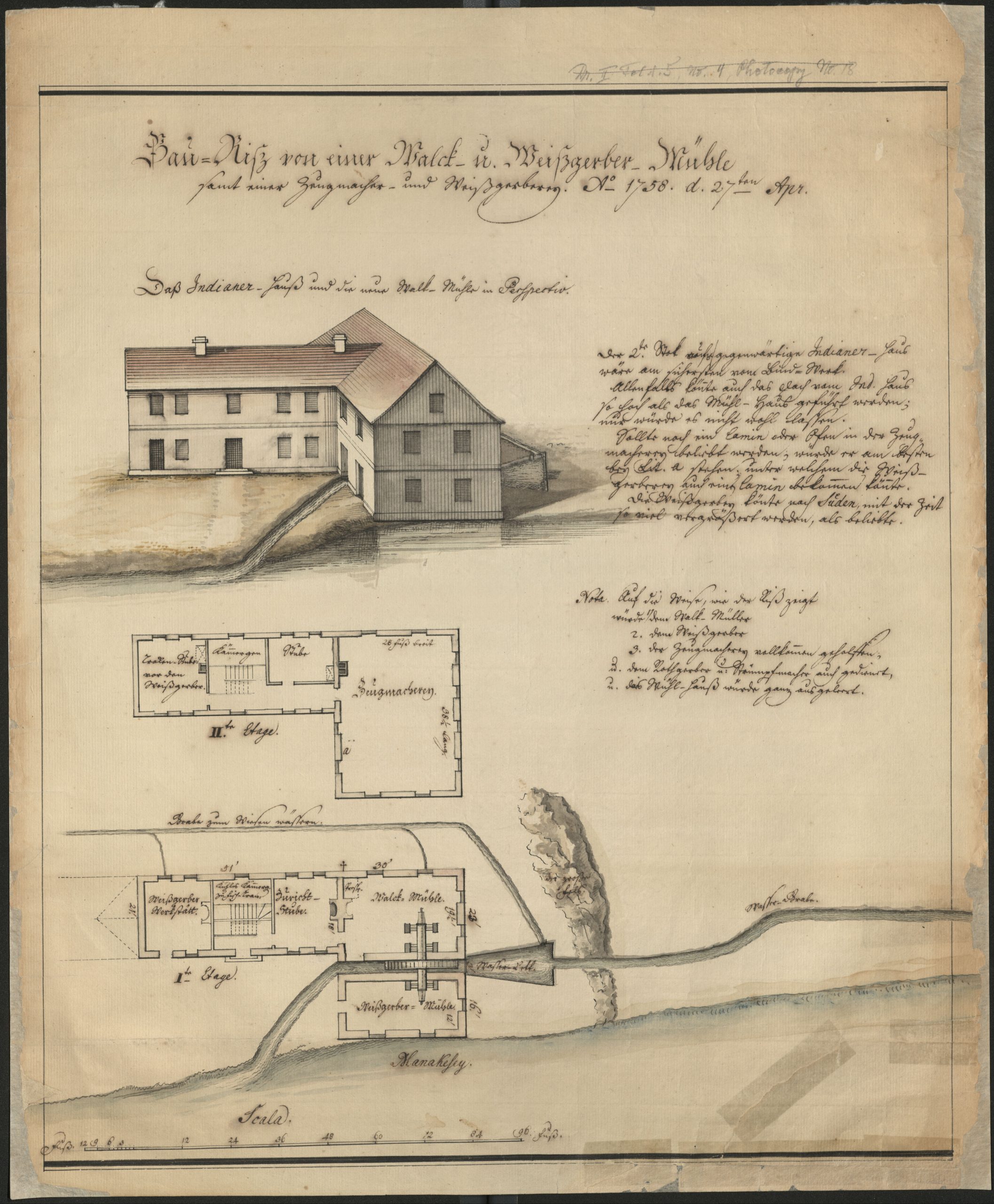 Often we think of archives as a resource for learning about history through letters, diaries, images, and other records of events that occurred in the past, but it can be easy to overlook that they can also show what might have been, through such records as plans for events that were canceled or for buildings that were ultimately not constructed. A good example of this can be seen with this plan for a mill that was proposed in the Moravian community of Bethlehem, PA, as part of what is now known as the Colonial Industrial Quarter.

This document, dated April 27, 1758, is a proposal by the community’s cloth workers to expand an existing building into a new mill that would support multiple industries, specifically fulling¹, bolting², and tawing³. The building in question had been constructed in 1752 with the intention of housing visiting Native Americans. However, by 1758 the Moravians of Bethlehem had instead chosen to focus on a separate community for Native Americans called Nain₄, and the building was free for other potential uses. The cloth workers expressed concern that the existing mill might not be able to survive the winter season and if so would cost the community money as customers went elsewhere, and went on to state that they were willing to begin work immediately if the proposal was accepted. Multiple plans were suggested, with the proposal illustrated here being the most complex as it involved both a two-story addition and a second floor being added to the existing building. The plan shows how the space would have been divided, with rooms on the first floor for the tawing work and a waterwheel that would have powered the machinery and space on the second floor for use of the clothmakers and tawers. The plan also shows how a new millrace and reservoir would have been needed for the waterwheel, while a second channel would have been used to irrigate a nearby field. It is apparent that it was not accepted though as the existing mill continued to be used until it was destroyed by a fire in 1869, while the other building was torn down in the early 1800s after the foundation was damaged by a newly emerged spring.

While this proposed mill was never constructed and the building itself is long gone, it is still possible to experience some of what the Moravian industry was like through visiting the Colonial Industrial Quarter in Bethlehem, which is maintained and operated by Historic Bethlehem Museum & Sites, who run tours and events at the site as well as having added a number of informational signs that illuminate this fascinating aspect of history.

¹ A fulling mill was used to clean oil and dirt from the cloth and involved pounding the material with hammers powered by a waterwheel.
² A part of the milling process, involving separating the flour from other parts of the grain.
³ A leather-making process that does not use tannins from tree bark, typically using alum instead, which produces soft, pale leather.
₄ For more information on Nain see our previous Digital Collections Spotlight here.