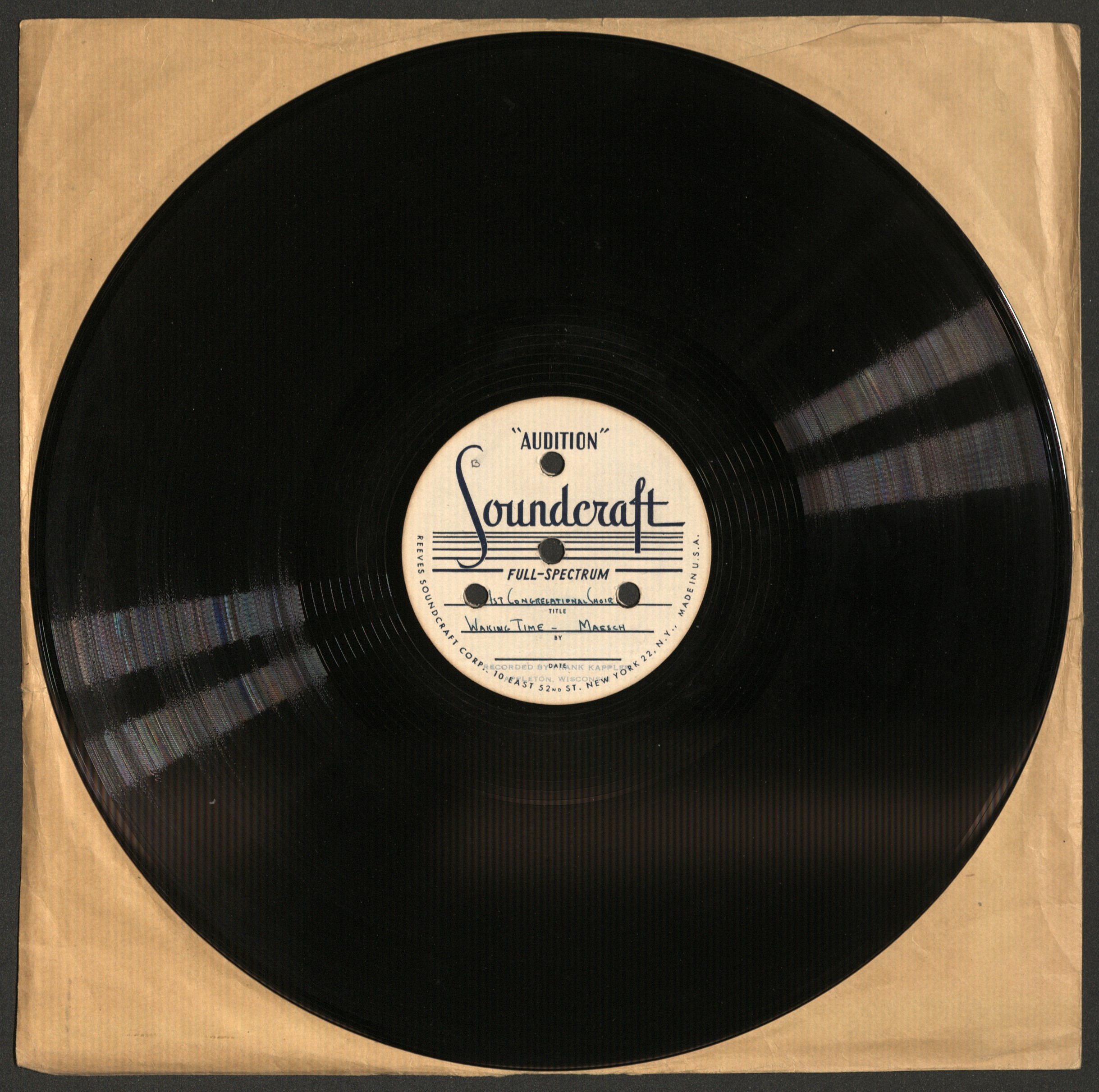 Most of the items that have been highlighted in these posts have been textual and visual materials so we thought it would be interesting to highlight a different aspect of our holdings, specifically a number of audio recordings on phonograph discs and our ongoing work to catalog and preserve them.

Earlier in the year, we conducted a survey of audiovisual material in the vaults, identifying a variety of materials including film strips, VHS tapes, CDs, and the previously mentioned records. While in the long run, we plan to improve the cataloging and storage of all of these, as well as digitizing them if possible, we have decided to focus on the phonograph discs initially.

Now that the initial survey has established how many phonograph discs are in the collection and where they are located in the vault we have moved on to updating their storage and improving the catalog records for them. The majority of the records were stored in paper sleeves which were either loose or more commonly stored in cardboard sleeves. This is not the best option for preservation purposes, both because the paper is typically acidic which can damage the record and because the paper can rub across the record and cause damage that way. Consequently, we have acquired archival-quality plastic sleeves that can house and protect the discs, which can then be returned to the original paper and cardboard sleeves. In addition, many of them are either uncataloged or cataloged with only minimal information such as title and artist. As such we have been working on ensuring that all of them are fully cataloged, including the content of each record, the production credits, and any additional materials found with them. This will make the phonograph records far more accessible for discovery by researchers, while our long-term goal of having them digitized will further aid in preservation.

The majority of the phonograph records are the 12” vinyl LPs with which many people reading this are likely familiar. These feature recordings of music composed by Moravians or performed by Moravian groups such as church choirs, making them a valuable resource for the study of Moravian music. Additionally, we have a smaller number of more unusual discs such as the ones shown below. 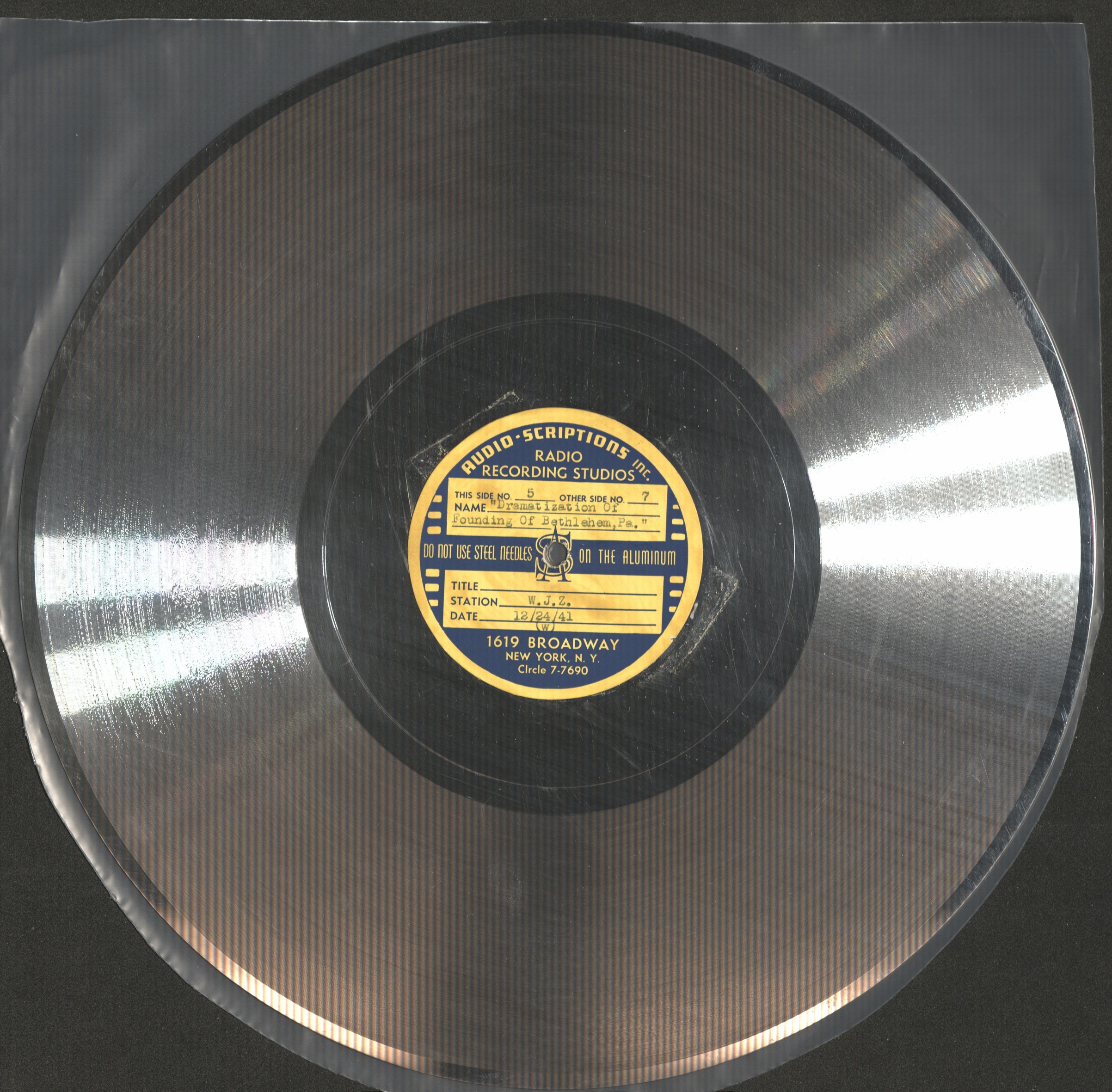 This unusual-looking record is a 12” aluminum disc, one of 4 we have that were made by a company called Audio-Scriptions and according to the labeling are a recording of a dramatization about the founding of Bethlehem, Pennsylvania, that had been aired on a radio station in New York City on Christmas Eve in 1941. Aluminum records were used between the 1920s and 1940s but fell out of favor as World War II approached and aluminum was needed for the war effort, the discs are sturdy but require the use of a specific type of needle for playback as the standard variety can scratch the surface.

This record is a 12” lacquer disc with a recording of a choir performance, likely from a Moravian congregation in Wisconsin. In contrast to most records, which are made entirely from molded vinyl, lacquer¹ discs consist of a core, most commonly aluminum though glass and cardboard are also possible, with a nitrocellulose² coating that the grooves are cut directly into. They are still in use in the production of vinyl records, acting as the master copy that the molds are based on, and historically were also used for home or onsite recordings which appears to have been the case here. These records are known to be somewhat fragile as the coating can be easily scratched or chipped, there is a risk of delamination³, and they can only be played a limited number of times before the sound degrades as the needle progressively scratches the soft material. As a result of this, as well as the fact that these are likely to be unique recordings whereas the vinyl records were typically mass-produced, these lacquer records are a priority for preservation and eventual digitization.

Moving forward in this project, MAB staff will continue to rehouse and catalog these phonograph records and begin to plan for expanding this project to other forms of audiovisual material as well as the long-term task of digitizing these valuable resources on the history and work of the Moravian Church.

² This material does not appear to carry the same fire risk that nitrocellulose film does.

³ With delamination, the nitrocellulose coating begins to pull away from the core as the materials expand and contract at different rates in response to temperature changes.