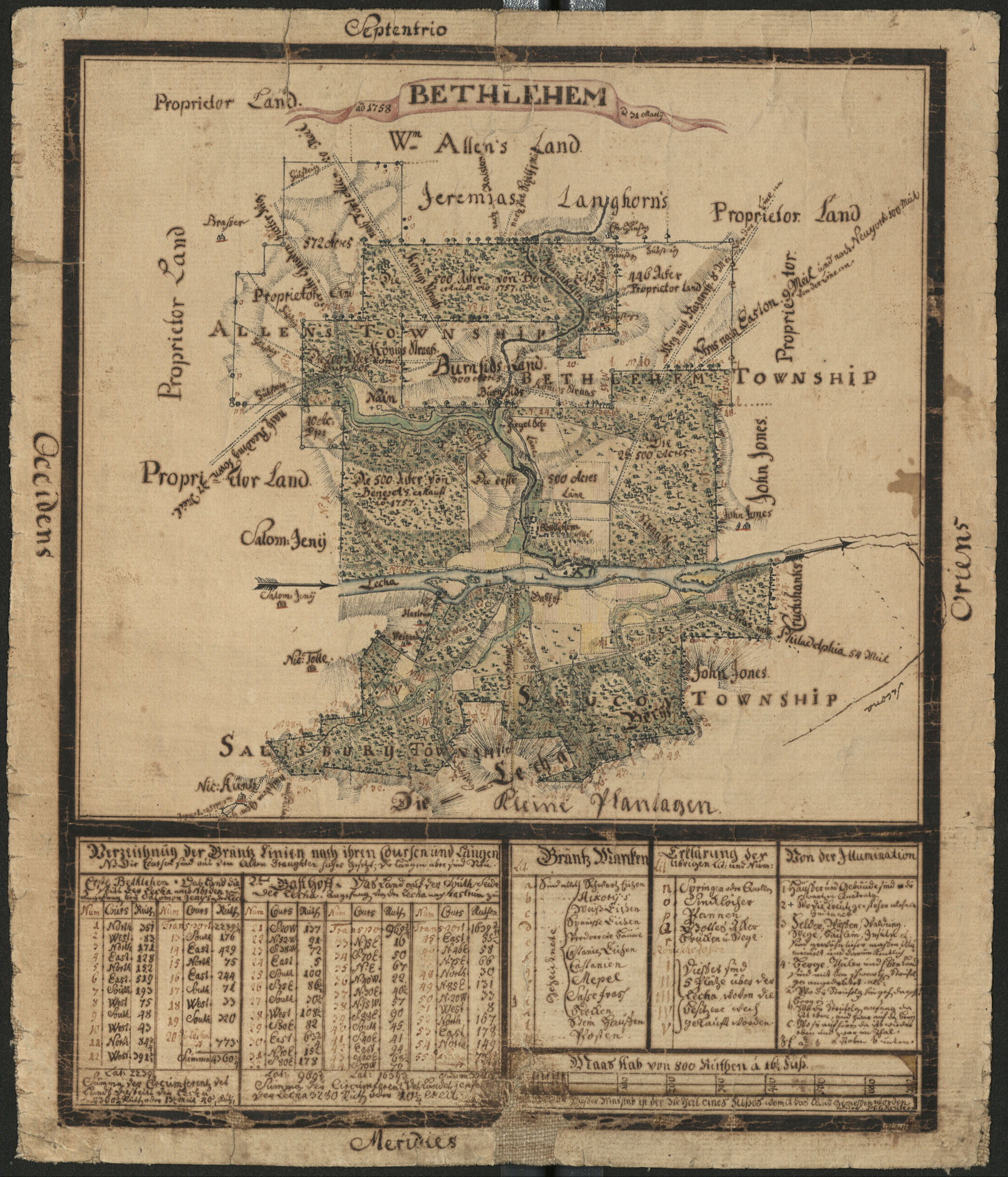 This map from 1758 shows the settlement of Bethlehem and the region around it, including one of the many historic locations in the region that can still be visited today, specifically a farm know as Burnside Plantation which can be seen north of Bethlehem and is labeled as “Burnsids Land”.

Burnside Plantation is named for the Moravian businessman, lay preacher, and politician James Burnside. Born in County Meath, Ireland, on June 4, 1708, Burnside traveled to Savannah, Georgia in 1734, where he worked as the clerk on the settlement’s store in addition to farming. He married Margeret Bovey, had a daughter named Rebecca, and was introduced to the Moravian Church through attending religious meetings hosted by John Wesley alongside August Gottlieb Spangenberg and later through working with Moravian missionary Johannes Hagen at an orphanage started by George Whitefield¹. After the death of his wife, Burnside traveled to Pennsylvania with Rebecca in 1745, though she died of smallpox the following year. He ultimately married a widow named Mary Wendover and worked for several years as a lay preacher. In 1748 he retired but chose not to live in Bethlehem, instead purchasing 500 acres adjacent to Bethlehem, where he built a new home and began farming. In 1751 he sold 200 acres to the Moravians, which is reflected in the map which notes the property as being 300 acres. Burnside would go on to be elected as the first representative from Northampton County, serving two one-year terms in 1752 and 1754. He passed away in 1755.

After her husband’s death, Mary Burnside moved to New York City and in 1758 she sold the remaining land near Bethlehem to the Moravian Church, who would manage it and lease it to farmers until 1848. Notably, during this time the respected Moravian organ builders Johann Gottlob Klemm and David Tannenburg lived and worked on organs there. After 1848 the land was gradually split apart until in 1986 Lehigh County purchased the remaining 6.5 acres for preservation, leasing it to Historic Bethlehem Museum & Sites, who maintain and operate the property as a historic site interpreting farming and farm life from 1748-1848. The garden is maintained by volunteers and the general public can visit the property which is listed on the National Register of Historic Places by taking a tour of the property or visiting during many popular events hosted on the site such as the popular summer Blueberry Festival.

¹ For more on the Moravian Church in Savannah see our earlier post, “Moravians in Georgia”, available here: