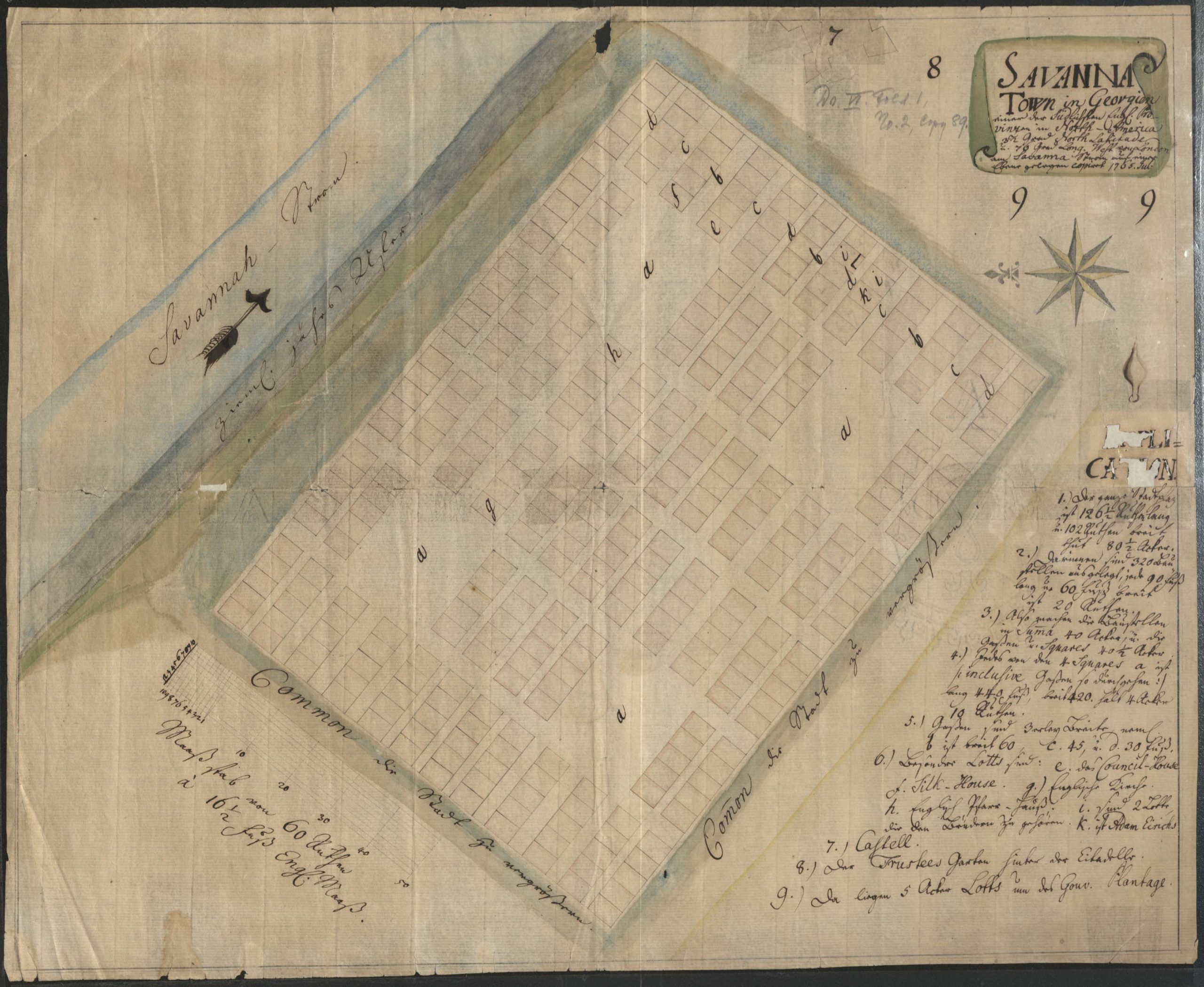 This map of Savannah, Georgia, is from July 1765 and illustrates and expands on a topic touched on in a previous Digital Collections Spotlight, specifically an early effort by the Moravian Church to establish itself in the future United States.

In 1726 Count Nicolaus Ludwig von Zinzendorf allowed a community of Schwenkfelders, a group who followed the teachings of German theologian Kaspar Schwenckfeld von Ossig, to settle on his lands in Saxony. Unfortunately, a shift in government in 1733 resulted in a greater risk of persecution for the Schwenkfelders, and they approached Zinzendorf requesting his aid in traveling to North America, specifically to the English colony of Georgia. Zinzendorf successfully secured land there and helped the Schwenkfelders travel as far as Holland, but the group became concerned by reports of difficult climate and poor treatment by the English and decided to instead travel to Pennsylvania as that colony’s government-guaranteed religious freedom and had a more familiar environment. In light of this, the Georgian leadership agreed to let the Moravians settle on the aforementioned land instead.

The initial settlers, a group of ten led by August Gottlieb Spangenberg, arrived on April 6, 1735, and immediately began work establishing themselves. In the following years more Moravians, perhaps most notably David Nitschmann, would arrive and, in line with other Moravian settlements, they actively worked to minister to Native Americans in the region and enslaved persons in nearby South Carolina. However, the community faced several issues such as disease, disputes amongst the settlers, tensions with other religious groups, and conflicts between their pacifistic ideals, and the local government’s fear of Spanish attacks¹. As a result, a number of the Moravian settlers leftover time, settling elsewhere in Georgia, returning to Germany, or traveling to Pennsylvania, and by 1740 there were only six settlers remaining who themselves left for Pennsylvania in light of the growing risk of war with Spain. These Moravians were given free passage by the evangelist George Whitefield, who then hired them to construct an orphanage on land he owned in Pennsylvania. He ultimately made the Moravians leave his land due to religious disputes, but in time they purchased the land themselves and founded the settlement of Nazareth. The church would continue to own the property in Savannah, and on one occasion had to take a squatter to court to protect it, until at least 1822 before their claim was ultimately abandoned.

While the Moravian community in Savannah, Georgia, was never especially large, it nevertheless was important in the church’s expansion and a stepping stone in the path that would in time lead to the founding of other communities such as Bethlehem and Nazareth, Pennsylvania.

¹ The Spanish would attack Savannah in 1742, as part of a larger conflict known as the War of Jenkin’s Ear, but were rebuffed.