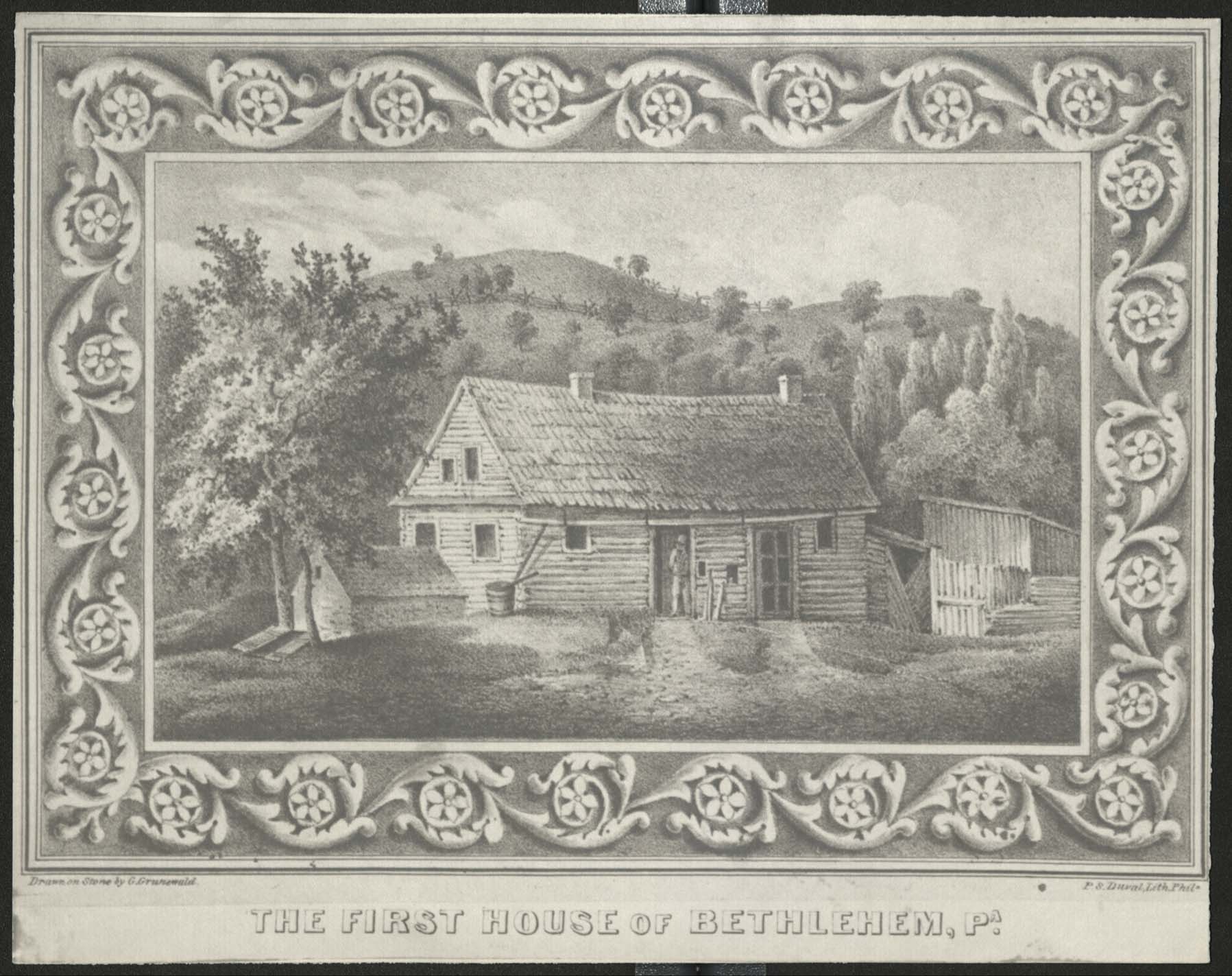 This holiday season seems a good time to highlight this 19th-century lithograph by Gustav Grunewald, which portrays an important location in the history of both the Moravian Church in the United States and of the city of Bethlehem, Pennsylvania. It shows the first house built in Bethlehem by the Moravian settlers, which was also the location where the city was named in 1741.

Moravian settlers first arrived in North America in Savannah, Georgia in 1735, with the intention of evangelizing the Native Americans in the region. Unfortunately, the Moravians’ belief in pacifism caused conflicts and tension with their neighbors, and, in 1740, the Moravians accepted an offer from evangelist George Whitefield to travel to land he owned in Pennsylvania, specifically the site of modern-day Nazareth. Ultimately this partnership broke down due to theological disagreements between Whitefield and the Moravians and they had to leave the land, though the church would later purchase it themselves. In 1741 the Moravians bought 500 acres of land from the merchant and politician William Allen. It was on this 500-acre tract, located where the Lehigh River and Monocacy Creek met, that the Moravians would found their new settlement in 1741. Later that year Count Nicolaus Ludwig von Zinzendorf, the leader of the Moravian church, visited the young town and on Christmas Eve gave it the name Bethlehem as described in the following excerpt from the diary of the Single Brother’s Choir:

“Building of Bethlehem began in 1741 in the month of March through David Nitschmann, bishop of the Moravian Brethren. It was called ‘Bethlehem’ by the dear Brother and angel of the Philadelphia congregation¹, Nicolaus Ludwig von Zinzendorf, as he arrived here on Christmas Eve in 1741. Then there was only the one big house that now is the Gemeinhaus, and the river, the great Lecha (i.e. Lehigh), whereupon it stood; thus he drew an analogy with the Hebrew בֵּית לֶחֶם (Bet Lehem) or Bethlehem in giving it this name.”²

As mentioned at the end of the preceding quotation, Zinzendorf chose to name the new community Bethlehem both in relation to the setting of the Christmas holiday and the date but also because of the similar sounds of the Hebrew “lechem,” meaning bread, and “Lecha,” a Native American name for what is now the Lehigh River. Thus Bethlehem could be read not only as its literal meaning of “House of Bread” but also as “House on the Lehigh.”

The diary of the Single Brother’s Choir has been digitized and made available in our online finding aid. A complete listing of digital resources (both digitized collections and translations) is available at https://www.moravianchurcharchives.org/research/digital-resources/.

Certain passages of this diary have also been translated and can be found at https://www.moravianchurcharchives.org/research/translations/.

• Maserjian, Julia Maynard: “Bethlehem, Pennsylvania 1741-1844,” Bethlehem Digital History Project, 2009. Available at http://bdhp.moravian.edu/bethlehem/bethlehem.html.
• Radzievich, Nicole. “The man who wrote the story of how Bethlehem got its name on Christmas Eve,” The Morning Call, December 24, 2019. Available at https://www.mcall.com/news/local/bethlehem/mc-nws-bethlehem-pa-name-christmas-eve-20191225-csdgewpsuveudemiysecm2o5rq-story.html.