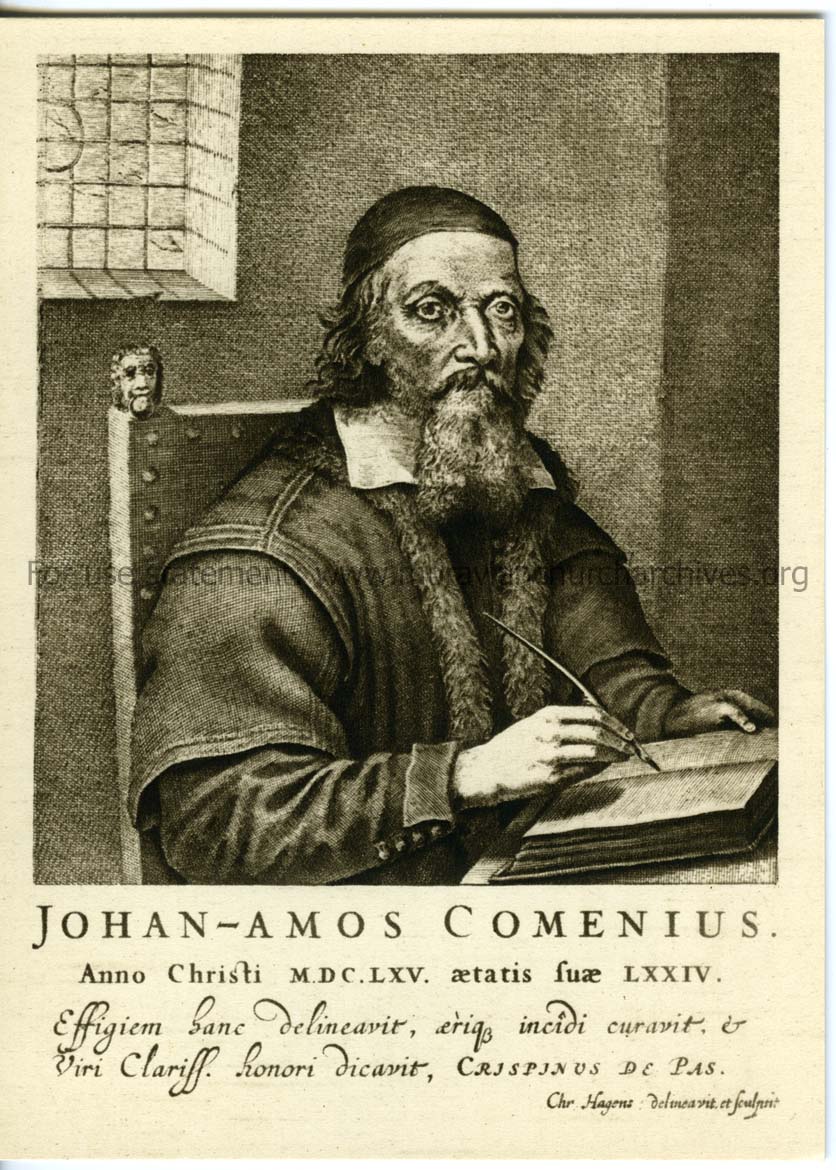 As today, March 28th marks the birthday of the Czech scholar and religious leader Jan Amos Komenský (best known as John Amos Comenius) we are highlighting several items from our collection that relate to him and his role in the history of education and the Moravian Church.

This postcard shows a 1670 illustration by Christian Hagens of Comenius at work. Comenius was born in 1592 in the Uherské Hradiště district of the modern Czech Republic and was raised in the Unitas Fratrum, or Unity of Brethren, a group inspired by the teachings of Jan Hus¹, a 15th-century Czech priest who argued against what he saw as corruption in the Catholic Church and was consequently executed as a heretic in 1415. Comenius became a pastor of the Unitas Fratrum and led the church into exile in the face of persecution from the Habsburg dynasty. He would become an influential figure in theological and educational circles, working with or communicating with peers throughout Europe until he died in 1670. 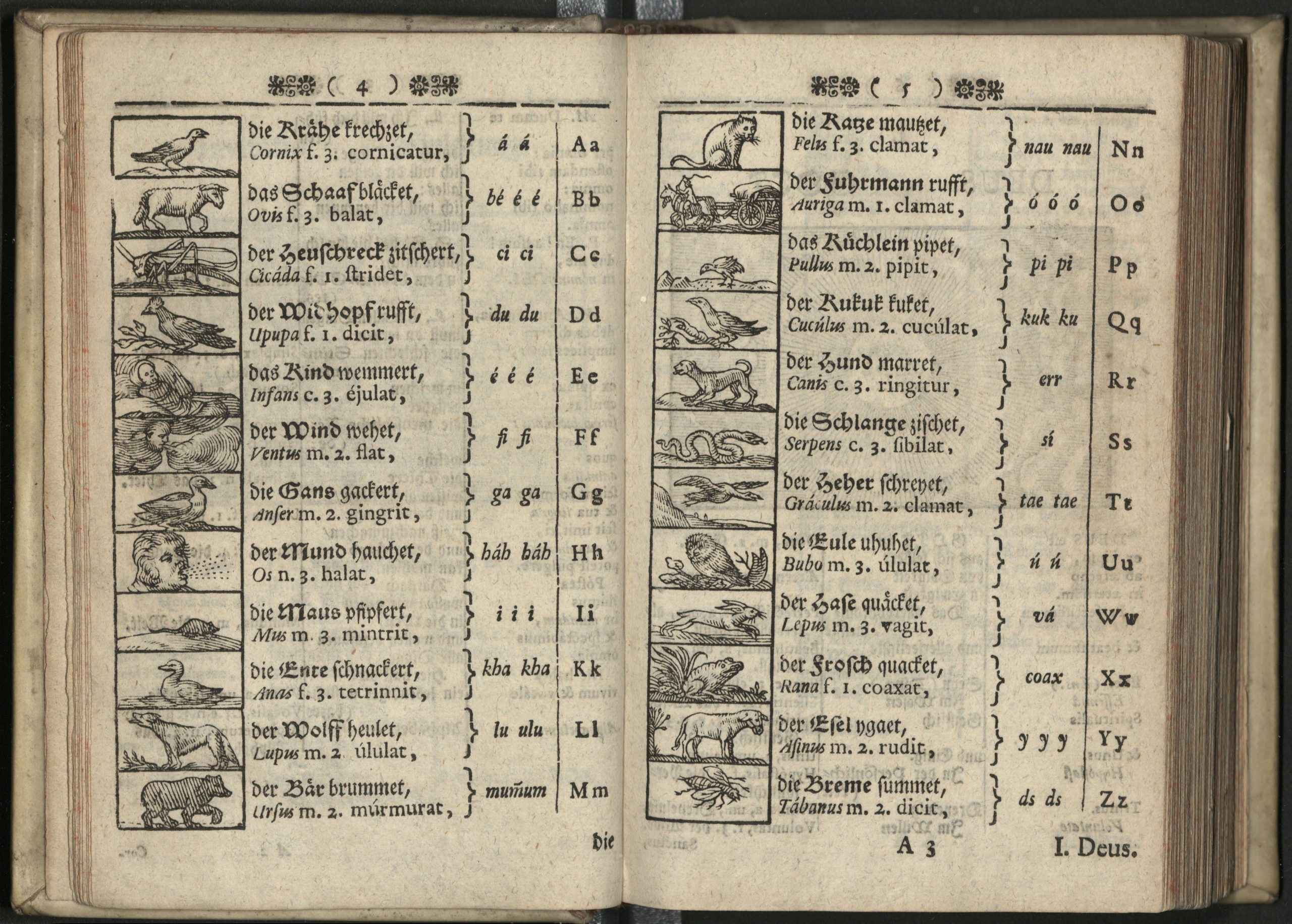 This page serves as a good example of Comenius’s work on education. It is from a 1732 German edition of Orbis Pictis or “Visible World in Pictures,” the first widely used children’s textbook in Europe. This page specifically addresses pronunciation by means of pairing letters with animals that make a similar sound. Hence for the letter “S”, a snake is shown with German and Latin text translating to “the serpent hisses” as an example of the letters sibilant pronunciation. Other spreads in the book typically feature an illustration of some theme, such as farm animals or musical instruments on one page and the other, a basic description of the various items illustrated. 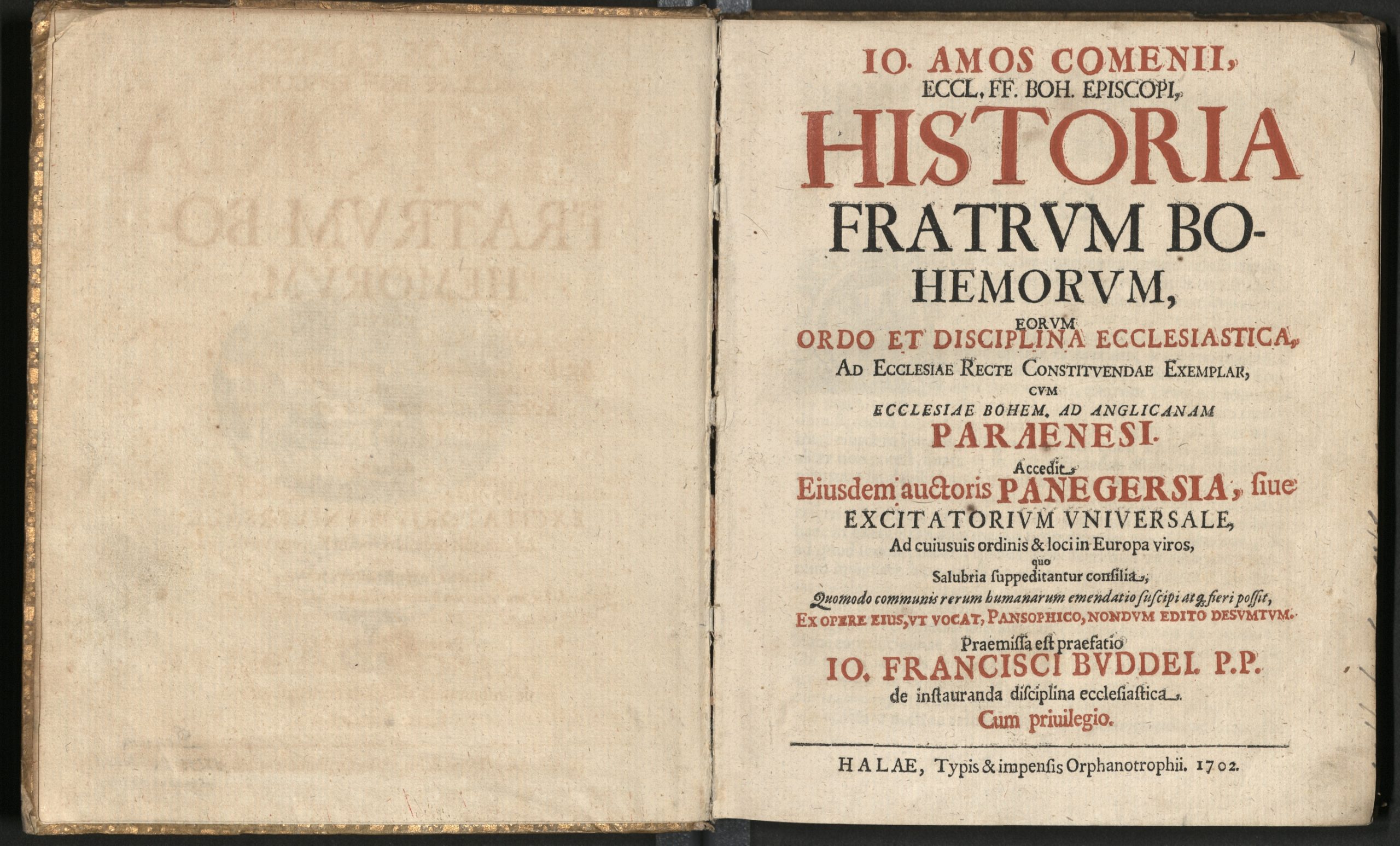 This is the title page from an early 18th-century copy of Comenius’s Historia Fratrum Bohemorum or “History of the Bohemian Brethren,” a short history of the Unitas Fratrum that Comenius first published in 1660. This work would ultimately prove influential a century later when descendants of the church, again facing persecution, came to live on the lands of Count Zinzendorf in Germany. In time Zinzendorf would encounter and read this text and recognize parallels between it and the religious beliefs of himself and the settlers on his land. This association would play a significant role in the eventual founding of the modern Moravian Church as a revival of the earlier Unitas Fratrum.

Today Comenius remains a popular subject of study, with at least 25 scholarly works published on various aspects of his life and work since 2016, as well as being honored in several ways such as Comenius Hall, one of the main buildings of Moravian University, and the Comenius Medal awarded by UNESCO for achievement in education research, while in the Czech Republic he is featured on the 200 crown banknote and his birthday is celebrated as Teachers Day.